I have lived in Virginia for over 9 years now, but a national park that is 30 short minutes away is one I have never visited.  Great Falls National Park occupies the Virginia side of the Potomac River.  The Chesapeake and Ohio Canal National Park occupies the Maryland side.  The falls are on the northern side with the Mather Gorge just south. While I have the senior pass for all national parks, I couldn’t very well use the ‘I dropped my mom at the lodge’ excuse as a means of entering the park with the senior pass she obtained for me out west in January (there is no lodging in Great Falls, otherwise I may have tried).  Alas, I spent the $10 to enter the park – worth it for the upkeep of our beautiful parks! 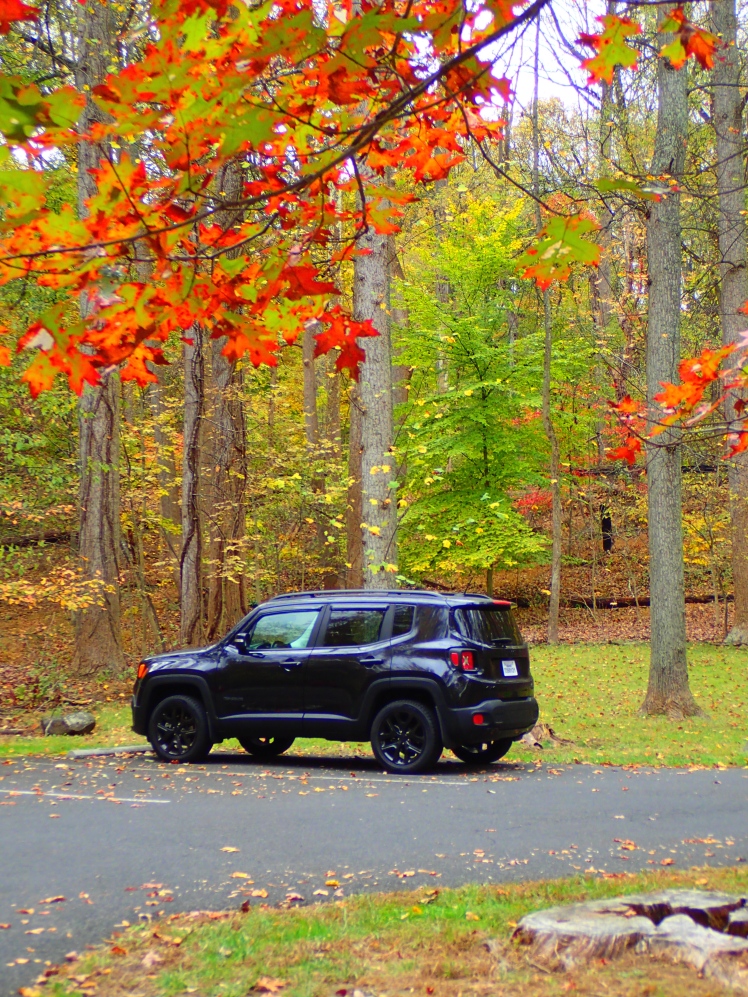 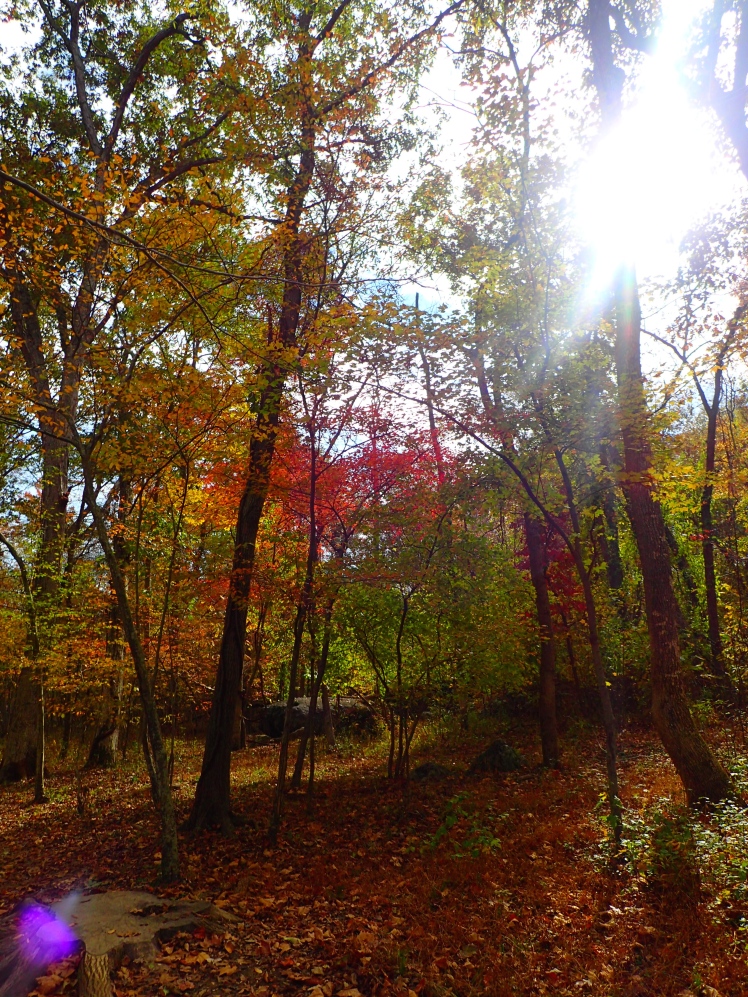 My hike began near the entrance.  I parked in the closest lot before walking into the park.  It was nearing the end of fall.  The colors were not at their peak, but it was still beautiful and quite colorful, just mostly yellow.

Visually, I was greeted by a short span of green grass and a few people walking about the area on a pathway.  My auditory senses then kicked in, and I could hear the falls beyond. The pebbled path led me into the park in a zig zagged direction towards the falls.  I’m not particularly good at following a set path, so I promptly flitted across the still green grass and over to the viewpoint for the falls.  That is the main attraction, right? 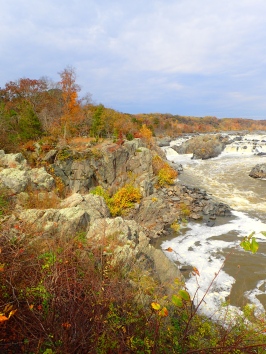 During the dryer months, the falls subside to a trickle.  My visit fell on an average day. After a heavy snowfall or rain upstream, the falls are almost entirely covered, as the river backs up.  Regardless, the river will never be what it was a century ago.  Even 30 years ago, the river was MUCH higher.

From there, I continued down the River Path.  As the title suggests, it snakes through the park along the river.  This pathway was far more congested than any of the other paths (I explored a couple on the way back), and with good reason – it follows the cliffs that border the river. 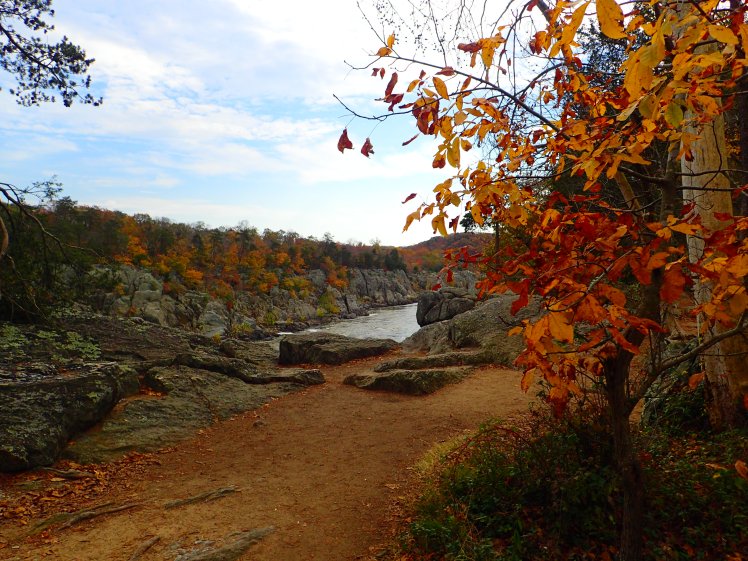 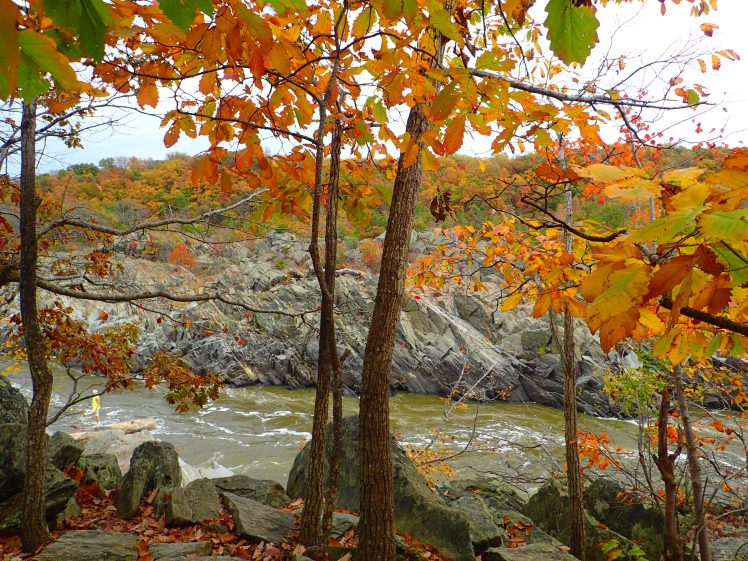 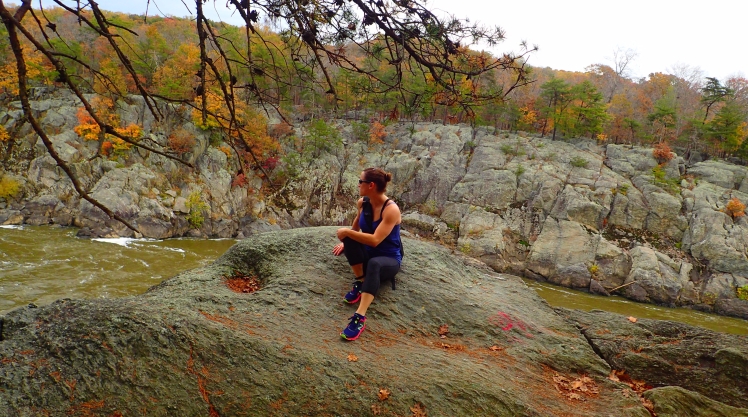 One of my favorite pastimes is people watching. This park was no exception. For a time, I was behind a pair of girls about 20(ish). The duo stopped for selfies or to chat about their friend’s Halloween party, all while wearing their designer leggings and tops.

A couple, I couldn’t help but approach, was walking their 4-year old pit bull named Maple.  We chatted about owning the lovable dogs, including their unfortunate skin issues, and the upcoming surgery mine will be having on her doggie ACL.  I bid Maple adieu, and continued the uphill climb over the rocks.

An older gentleman was walking his dog as well, but he was far less approachable as compared to the couple with the pittie.  He couldn’t get away from friendly, little me fast enough.  Why else do you have a dog?!  They’re people magnets.  Well… dog-people magnets.

Four kayakers were trying their luck in the river below.  Their brightly colored rafts were no match for the rapids, though, they made a valiant effort!  A little later I spotted them again floating down the gentle part of the river. 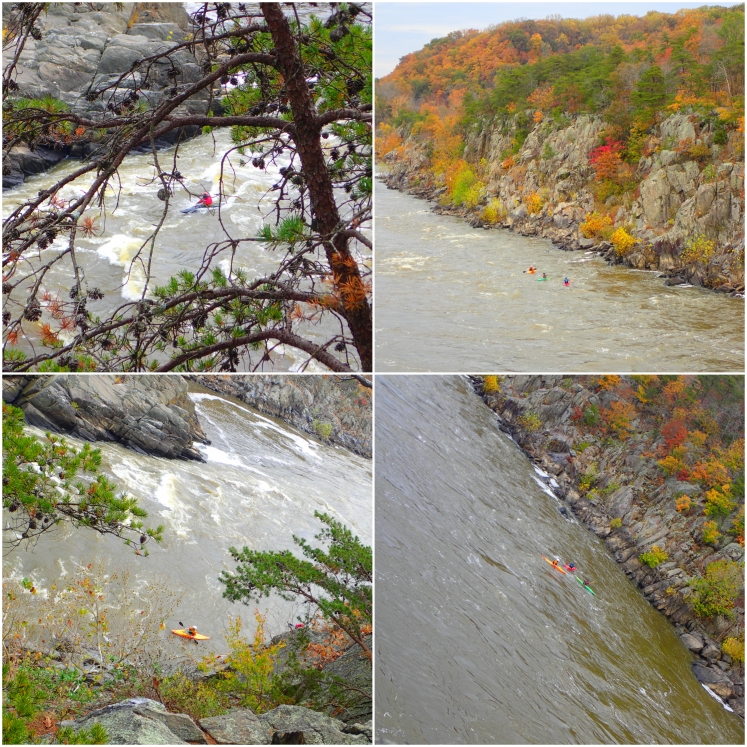 Part of people watching involves taking in the park-goers attire.  I was rather shocked by what I saw.  While I was expecting your typical hiking clothes, I saw everything from hiking boots to button downs and dress shoes.  Shouldn’t you people be at work?

While this isn’t the most breathtaking of hikes, the views were still pretty, especially with fall foliage (unfortunately, not at the peak), accentuated by the rocky gorge.  Seeing as I have hiked the Inca Trail, this was certainly not anywhere close to that in the difficulty department, but it still got my heart rate up, and the steep, rocky portions were a decent workout!

I almost forgot the rescue!  After I finished the River Trail, I snaked back around on another trail, I heard a helicopter.  While that sound wouldn’t typically catch my attention, the number of times I could hear and see it circling… did.  I made my way back to the river, and low and behold, the sound I assumed was motorized watercraft… was.  Four of them had converged on the Maryland side, the pilots of the crafts leading a group of hikers to safety.

I’ll be back soon, Great Falls!  Perhaps I’ll give the Maryland side a chance.