Alas, our stay in Bled had come to an end, but we certainly went out with a bang!  Sunday morning, we arose a bit sluggish – lots of celebrating, excitement and booze will do that to you.  Next plan…

The first time we wandered into Bled, we partook in a little, but awesome, activity known as canyoning.  The basic premise of canyoning is hiking up a mountain a ways, strapping on the necessary equipment, rappelling into a canyon, and then jumping from level to level inside the canyon.  It’s very cold.  Which is why you are wearing a body suit.  Yes, there is actually a point to me saying this… the final jump on this particular canyoning trip was a 30 ft. jump into a pool at the base of a waterfall/slap.  Basic premise of wedding dress destruction is jumping into a glacial lake in said dress as one final hoorah for the pretty, white garment.  Anyway, after some research, we discovered where this final jump was near Nomenj at Slap Grmečica.  Marshal, Hubs, Mama Rubes, and I loaded up in our rental and set out for Nomenj. 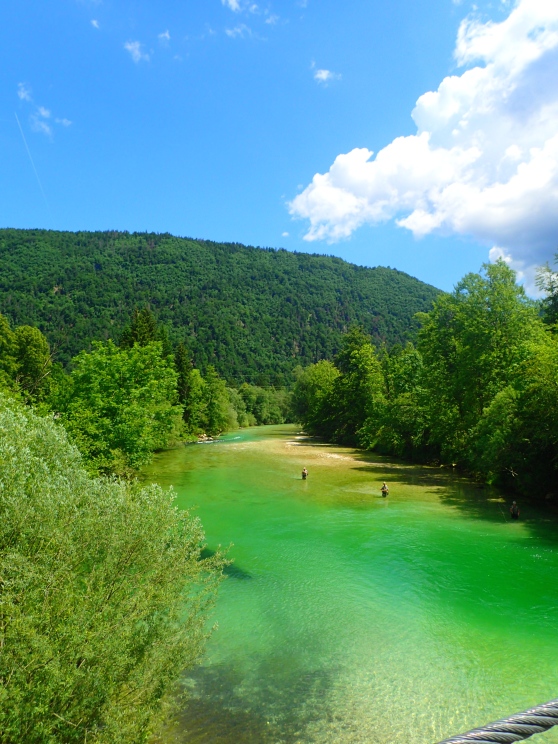 We arrived just as the hilarious Canyoning Bob and his fearless followers were about to leap from the top of the Slap.  We watched all of them fall into the cold water, and accessed the situation.  A collective agreement came to be… I should probably not make the 30 ft. jump in the dress, as I would have to scale the rock to get to the jump, and due to the flowing nature of my dress, I would have to risk it flying up around my head and face, causing quite a drowning hazard once I hit the water.  Drowning not being on my list of things to accomplish that day, I elected to flop into the pool from a rock that was jutting out into it.  Clearly, the safer option.

Even though I was unable to execute the high jump, Marshal did.  Eventually.  After much coaxing, several trips up to the top of the Slap, and a lot of mental preparation, he leapt into the frigid waters below! 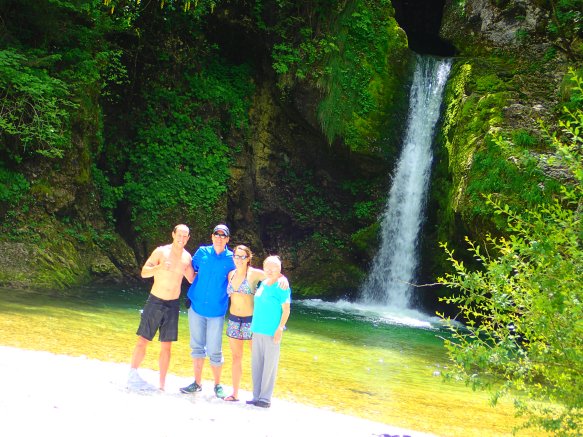 Mama Rubes even navigated the cold waters of the river to bask in the warm sun on the other side while we debated the dress destruction options.

Dress destruction achieved, we dumped Marshal off for his departure from this leg of his journey, we packed our things, and departed for Bovec.  Bovec is a mountain town in northwestern Slovenia.  Different peaks of the Julian Alps surround it.  This was my first time using AirBnB to secure accommodation, and I was initially quite nervous about it after hearing a few horror stories.  Alas, the apartment we stayed in was beautifully appointed with one bedroom, a huge couch and a full kitchen. 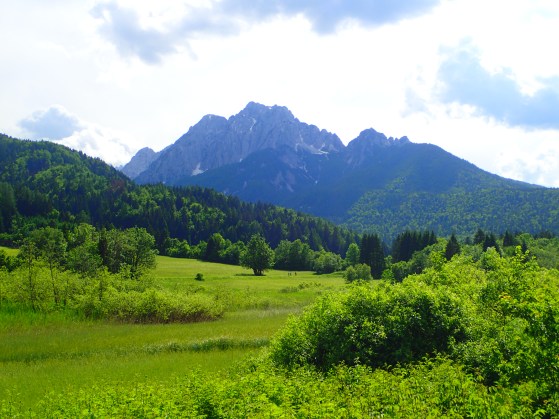 The drive to Bovec was spectacular, especially since we drove north towards Austria at the urging of Petra.  At the suggestion of Miriam, we marked a couple of places to stop on along the way.  We missed one (Lake Jasna), but managed to find Zelenci, a nature reserve, and wetland, as well as the source of the Sava River that is near the town of Kranjska Gora, a ski town.  The water was more of the same insanely clear, turquoise, but this water had mini geysers clustered around the bottom.  This phenomenon is unique to Slovenia.  Getting there involved a short stroll in the woods before you arrive at the small lake. 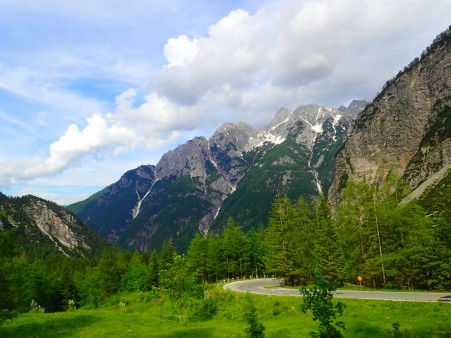 From there, we headed up.  And up.  And up.  Hairpin turns wound their way up the mountain.  I cannot imagine driving this road in the winter.  Stone was laid into the road on the turns, likely for traction.  Speed was low, but the view was fantastic.  There were exactly 50 hairpin turns, half up one side and the other half down the opposing side. 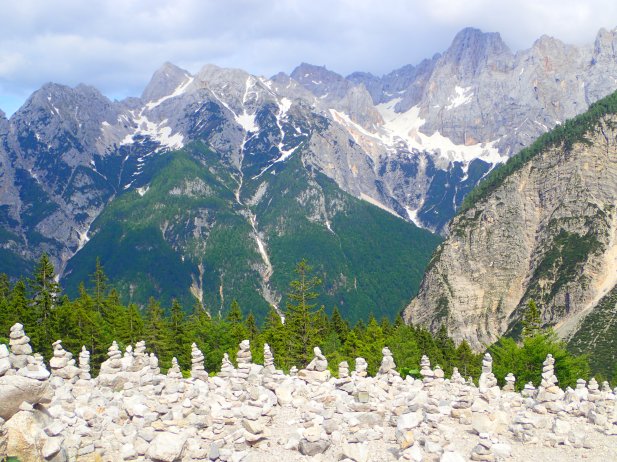 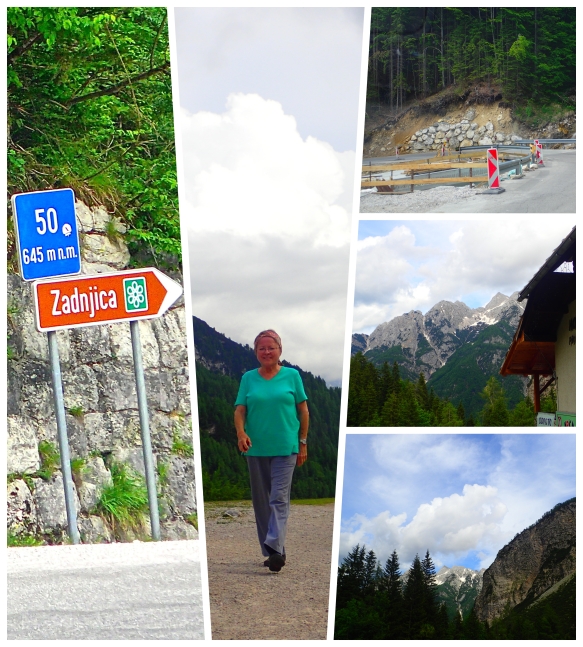 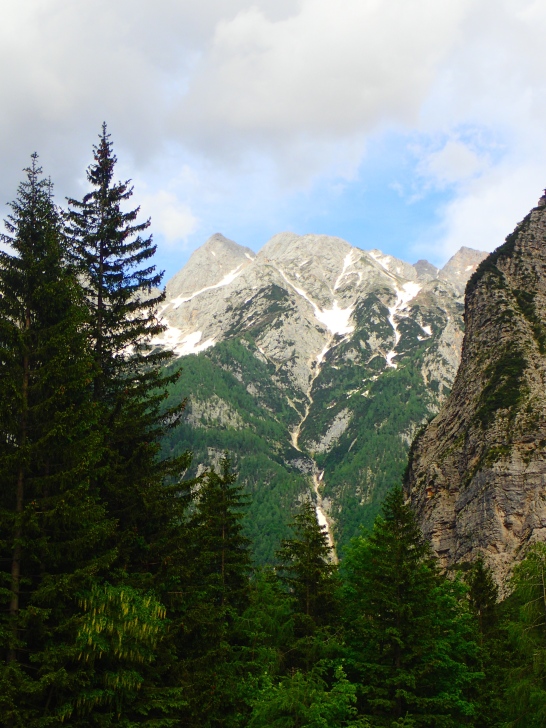 Finally, we reached the top… and Vrsic. Vrsic sits at 1611m.  The upwards hairpin turns ended, and we were immediately struck by the view on the opposing side of the mountain.  I wish we had had the time to hike it.  After a few photos and some gazing, we started our descent.  The hairpin turns continued.  A few of the turns had obviously been mauled by rockslides and were under repair.  Thanks, Petra! That was definitely worth the drive! 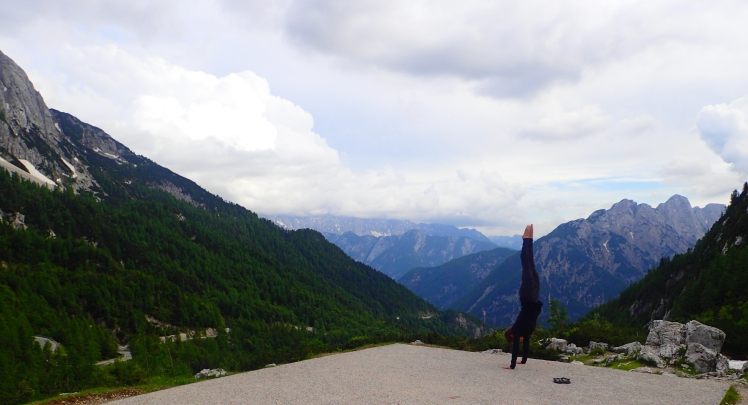 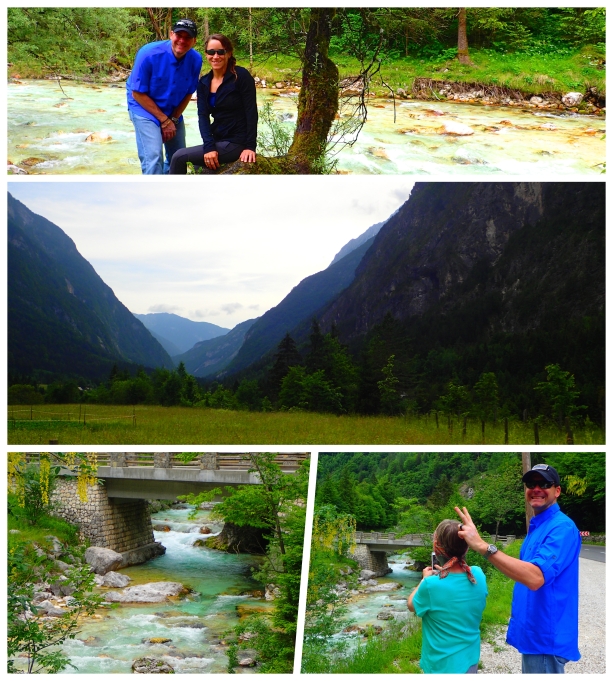 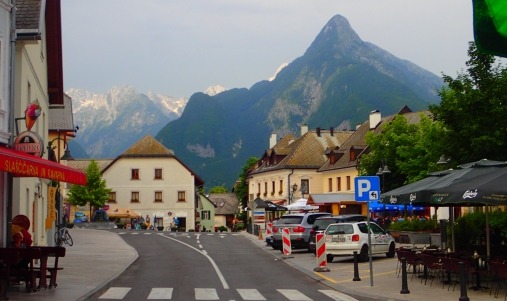 We meandered through small towns before arriving in a slightly larger small town… Bovec.  Restaurants lined the main drag, most with outdoor seating.  Following the direction of Sygic, mixed with a screen shot of Google Maps, we eventually arrived at our AirBnB – my first ever experience of the website, so we were a bit nervous given the horror stories I’ve heard about last minute cancels.  Alas, we were pleasantly surprised by the nice, newly renovated apartment we had acquired for two nights.  The kitchen was brand new and well equipped, the bathroom was new and clean, and the bedroom was nicely appointed.  The only downfalls were the lack of AC, as the apartment could get a tad warm during the day, and the water heater only allowed for a shower and a half before going cold.  Tina’s great little place can be found here: https://www.airbnb.com/rooms/18014702

A few highlights of this part of the trip:

Totaling 136m in height, Slap Boka is the tallest Slovene waterfall.  The source of the waterfall is somewhere in a completely underwater cave behind it, but has never been reached.  The last attempt was in 1996 by divers trying to traverse the cave, but only 800m of the cave have been explored. 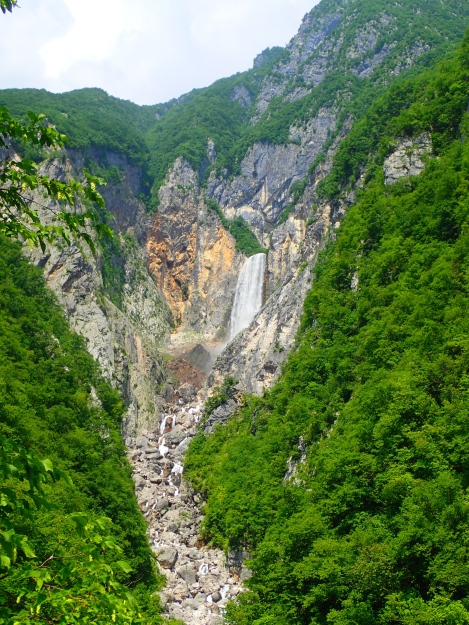 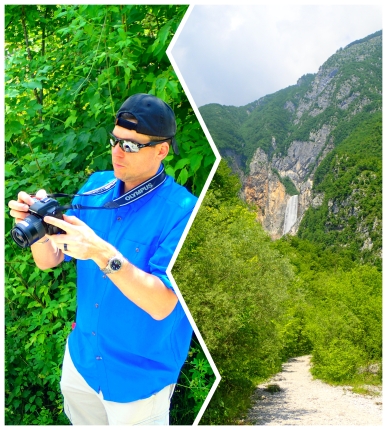 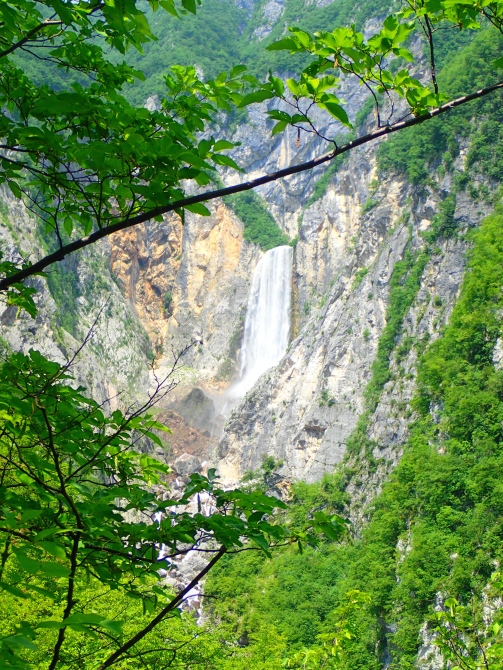 The hike to the viewing platform below the waterfall is short, and somewhat uneven, but provided a good view of the falls.  Husband and I wished we could have gotten right underneath the falls, but alas, we didn’t have the time or the attire to make our own way up. 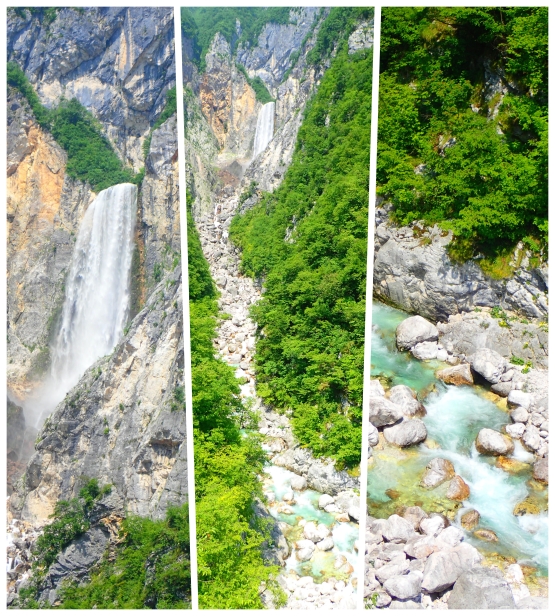 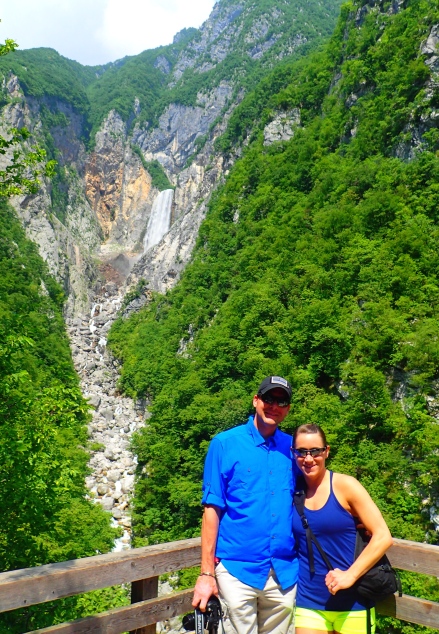 Far less spectacular than expected, the Napoleon Bridge arches over a narrow stretch of the river.  The beautiful turquoise Soca River flows through this particular canyon, which at this point, is at its narrowest.  The bridge is near Kobarid, and the area is rich with war-related history, from the Napoleonic times, to WWI and WWII.  The bridge has been rebuilt multiple times, previously being made of wood and iron.

I’d seen what looked like a path down to the Soča River while we were driving away from Bovec. We made a pit stop and explored. A steep path, mostly consisting of haphazard stairs, leads down to the water. Well… almost to the water. It leads to a rocky outcrop jutting out into swiftly moving emerald water. Worth the hike down and back up.

This gorge is a short jaunt from Tolmin (aptly named gorge, I suppose), and consists of two different rivers, Tolminka and Zadlaščica, which meet in the middle of the gorge. The gorge is located at the southern most point of Triglav National Park.  The gorge, and the easy-ish hike into it, are absolutely worth the trip. 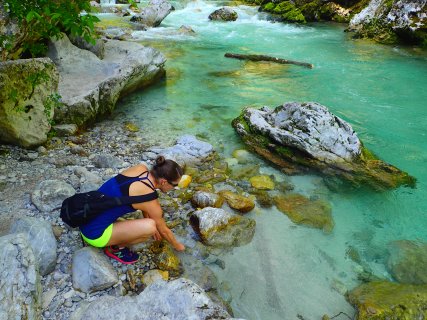 The Tolminka side of the gorge is an easy walk along paths close to the water.  As soon as you start heading down the path and through the carved-out tunnels, you can feel the change in temperature.  Much like other bodies of water in Slovenia, the rivers are a crystal clear turquoise. 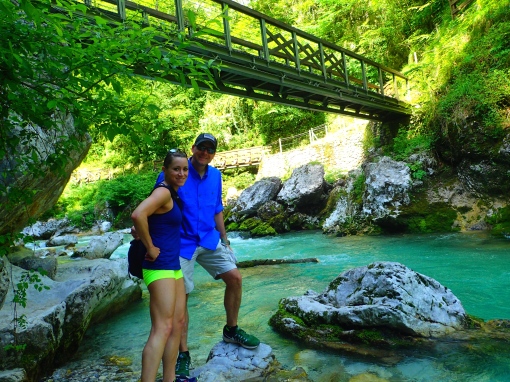 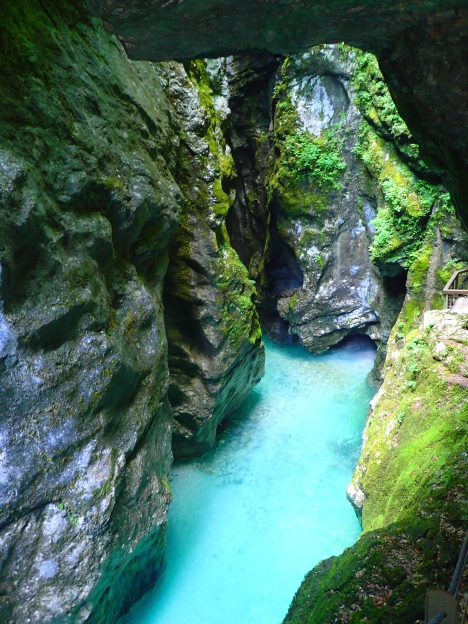 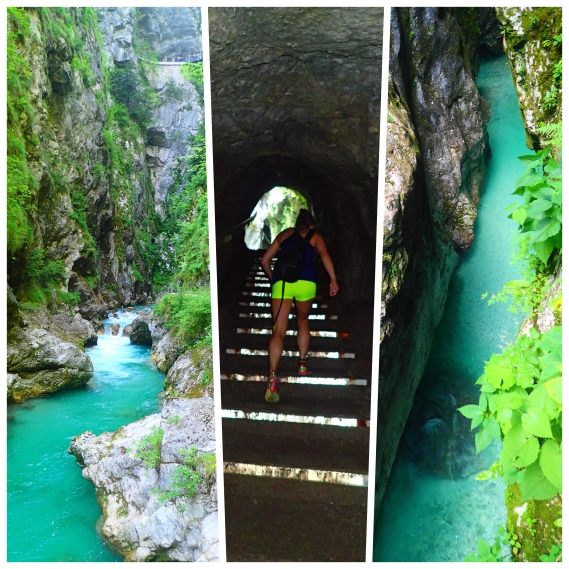 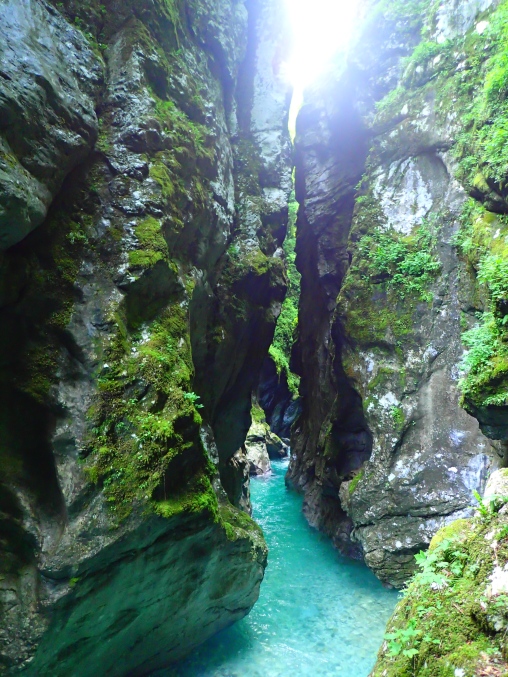 The Zadlaščica side of the gorge is far more wild.  Vegatation is thicker, and the path leads higher up in the gorge, as opposed to the other side that winds along down close to the water.  At the end of the path, a large rock has fallen from above, and it was caught perfectly between the sides of the gorge.  This rock is known as the Bear’s Head, and it’s perched a good distance above the clear waters below. 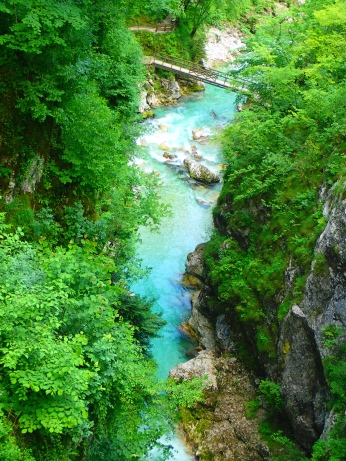 The trail also leads high above the gorge and connects with a road.

That road crosses the gorge via a rickety old wooden bridge that made husband woozy.

He’s really not a fan of heights. 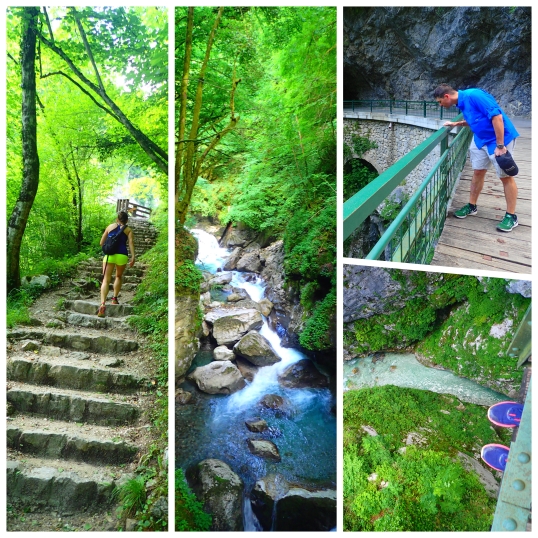 The paths were not packed with people, but we did run into a few other travelers, a couple of whom had dogs tagging along.  One was an energetic pittie, and the other an 11 year old small mix that probably would have gone home with us just as happily as she would have her owner.

This little mountain town is a great place to stop – it’s big enough that there are plenty of restaurants to try, and accommodation was easy to find.  Bovec is situated in a valley between the Kanin an Krn Mountains, and is absolutely beautiful.  I can’t say I minded waking up to the foggy morning mountain views just outside the window.

We failed to really branch out on our cuisine while in Bovec.  However, the food we did eat was delicious.  Gostilna in Pizerija Letni Vrt, which we settled on while walking the narrow streets of Bovec, had phenomenal pizza! We sat out on the patio and people watched while enjoying pizza and Slovene beer. 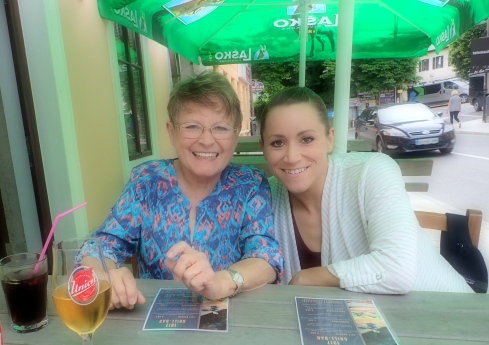 The following night, husband did a little research and settled on 1917 Restaurant, which we’d passed on our stroll the night before.  Awesome burgers (and more Slovene beer, of course!).  Directly across from this establishment, is a small ice cream shop – the owners don’t speak much English, but pointing and nodding always seem to work for us when a language isn’t shared.

Our walks through Bovec, since driving through the tiny town seemed ridiculous, took us down winding streets that were bordered by cute houses, all of which had flower boxes.  Flower boxes were a recurring theme throughout Slovenia, and make the entire country seem like it’s straight out of a fairy tale. 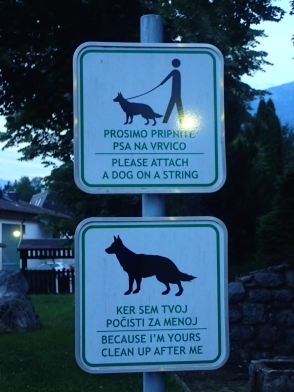 Just because I found this sign funny… perhaps I should start walking my pit bull on a string instead of a leash.

On the walk back to our apartment on our last night in Bovec, we made a pit stop at a church that jutted out of the middle of the town.  Župnijska cerkev sv. Urha was perched atop a hill, and had a beautifully kept cemetery in the rear of the building.  A few people were tending to the graves while we strolled through in silence. 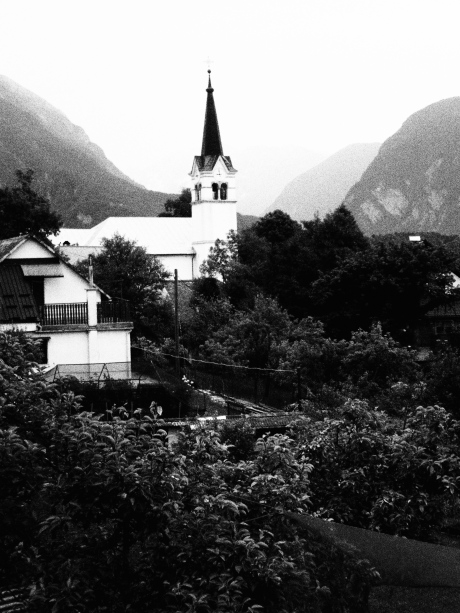 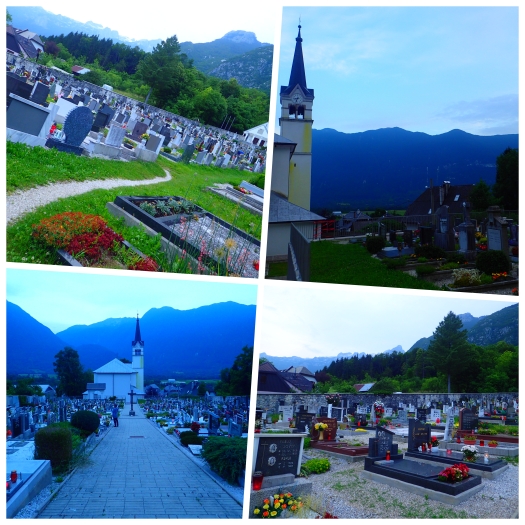 Alas, our time in Bovec had come to an end.  The following morning, we began packing up our belongings to start towards the coast.  I am never usually that sentimental about inanimate objects, but when it came to packing up my wedding dress, I decided to at least save part of it.  I retrieved scissors from a kitchen drawer, and hacked off the flowing skirt of my twice worn wedding dress! I kept the top, which is adorned with beading.  I think it’s safe to say a third wear is now out of the question! 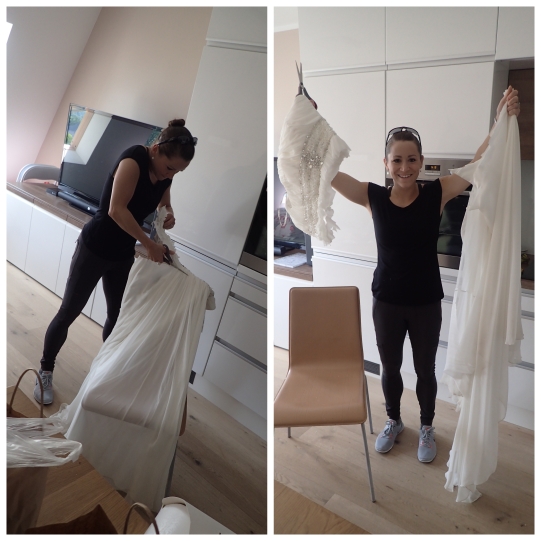 One thought on “Dress Destruction, 50 Hairpin Turns, and Hikes… a Trip to Bovec, Slovenia”